When you think of sound devices, there are some brands that immediately come to mind. Well, one of those brands is Jabra. From earbuds to the biggest devices that produce sound, Jabra always knows how to make their fans proud, and whenever there is a launch, they make sure that their products will become favorite ones by many people all around the world.

You may have heard about speakerphones I guess, not those that our phones allow us to do, though. It is not that simple!

A speakerphone is one of the greatest purchases that one can make. They are kinds of telephones that include loudspeakers and microphones, and you don’t have to hold them in your hands. You just leave it somewhere, and it works perfectly. By the way, speakerphones are great devices when it comes to meetings in general, and there are many people included in the room.

Both Jabra Speak 410 and Jabra Speak 510 are some of the most well-known speakerphones, that as you can notice, come from a special series by Jabra, Speak. Anyways, these devices, even though pretty similar, they do own some special features that make them differ from one another. 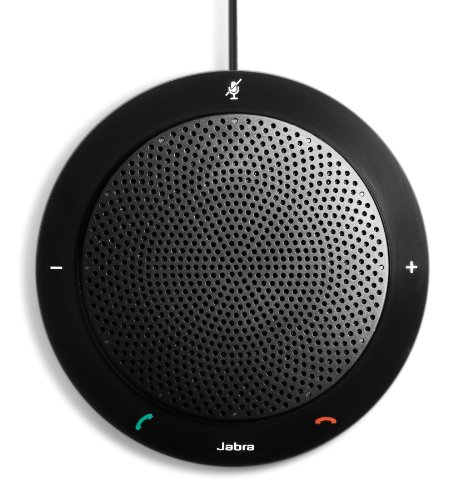 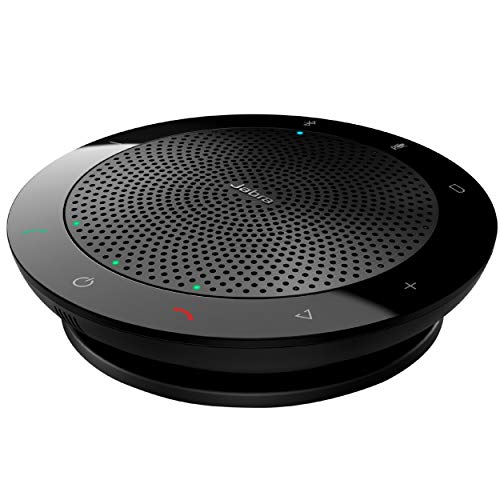 Jabra Speak 410 is a speakerphone that was launched in 2012. Even though more than a decade has passed, it still remains one of the first choices by many people worldwide, when needing a speakerphone.

This speakerphone comes in a total circular shape, and it comes in a black finish. When it comes to the size part, the Jabra Speak 410 is a super small and lightweight speakerphone, since it weighs only 4.6 ounces.

On the front part of this speakerphone, you will find a large grille that covers most part of it. Around the grille, you can find the control buttons, and they are all touch-sensitive. The buttons are as follows: On the sides are located the minus (-) and the plus (+) for the volume, at the bottom, Jabra has located the Talk and the End keys, meanwhile on the top part of it, you can find the mute button.

Jabra Speak 410 is a speakerphone that works totally wired, and it is basically the best plug-and-play speakerphone that you can purchase. At the back of it, you can find an integrated USB cable. That cable is used in order to connect it with different devices in which you may hold the meetings.

It is important to mention that Jabra Speak 410 can be connected with whatever type of device by that USB cord, but many people seem to use it more with laptops.

In case you are in a meeting with more people included, and you worry if everybody can hear or everybody can talk, I will surely say that you really don’t have to worry about it in any way! It owns a microphone which is a super performer! It can pick up the voice at 360°, and those voices are forwarded in the clearest way possible.

Now, when it comes to the voices, that you will be hearing, being able to test it in both parts, I again can assure you that everything is clean and clear!

What About Music?
It is not said that Jabra Speak 410 cannot play any music. As an overall test, the music sounds good enough, but still, it is important to not be sure and buy this speakerphone for music purposes.

Moving on to Jabra Speak 510, this speakerphone is kind of an upgrade of the 410 version. It is launched in 2013, and being three years younger than the first one mentioned, this speakerphone owns, of course, some similar features, but still, there are added some more new ones.

Based on the design part, on a first look, the Jabra Speak 510 is again circular and looks very similar to the 410, not to say the same. There’s the weight that differs because the 510 weighs 6.1 ounces. It is super portable.

Again, the front part of this speakerphone includes a grille and the control buttons. The buttons on this one are totally the same. The mute button, for volume (- and +), and the Talk and End buttons. Anyways, Jabra added two more different buttons to this speakerphone. There are the Bluetooth button and the battery one. How so? Let’s see below how and why!

The Jabra Speak 510 is one of the most significant wireless speakerphones, that you can find in the nowadays market. It works amazingly with Bluetooth of version 3.0. Based on this connectivity technology, this speakerphone is compatible and can be connected with different devices that include Bluetooth.

The connectivity on this speaker is considered 2-1! Besides working wirelessly, the Jabra Speak 510 can also work wired, while using a USB-A cord.

A section that should be special about this speakerphone is basically the battery life! Being wireless and working via Bluetooth, it is of course understood that it owns a battery.

The Jabra Speak 510 is driven by a CR2 battery, and once it is fully charged, the speakerphone can stay with you for up to 15 hours. Meanwhile, the recharging time is only two hours.

A section that should be special about this speakerphone is basically the battery life! Being wireless and working via Bluetooth, it is of course understood that it owns a battery.

The speakerphone is driven by a CR2 battery and once it is fully charged it can stay with you for up to 15 hours, meanwhile, the recharging time is only two hours.

What About Music?
The Jabra Speak 510 is amazing when it comes to listening to music. It is also considered an amazing portable speaker that can accompany you wherever you go.

Here we came at the end of this article. Based on the reviews of both speakers, you can notice that they are more similar than different. Anyways, the Bluetooth technology makes the Jabra Speak 510 go a step further because I know that wires are kind of boring.

Still, the fact that one is wired and one wireless doesn’t mean that the wireless one is definitely the best. Both of them do a great job while in use, and that’s the most important part.

I hope this article is understood and helps you have an idea when it comes to comparing Jabra Speak 410 and Jabra Speak 510!

Pay attention folks, it might catch your eye if you have broken earbuds and don’t know what to do with them.

Electronic devices like speakers, headphones, amplifiers, and many others use cable, to know the difference between TS and TRS cables, visit the article.

Speaker didn’t meet your expectations? No worries, I’ve got the perfect headphones for mixing & mastering, or invisible earbuds that you will absolutely fall for.

Sonos Bridge vs. Sonos Boost: Which Is Better?