The Iconic Gaming Headsets Have Progressed to the Third Stage.

Razer has completely dominated the competition and raised the bar for gaming headsets from the first release of the Kraken Series.
We spotted the Kraken headsets all over the place, whether on live broadcasts, e-sports, or anything else related to gaming.

Even if you wanted to, you couldn’t unsee them. They stood out from the rest of the headphones because of their striking green color. It was quite appealing.

With the Razer Kraken V3 HyperSense, Razer has brought the Kraken line back to life. It now has new tricks up its sleeve that promise to take game immersion to new heights. 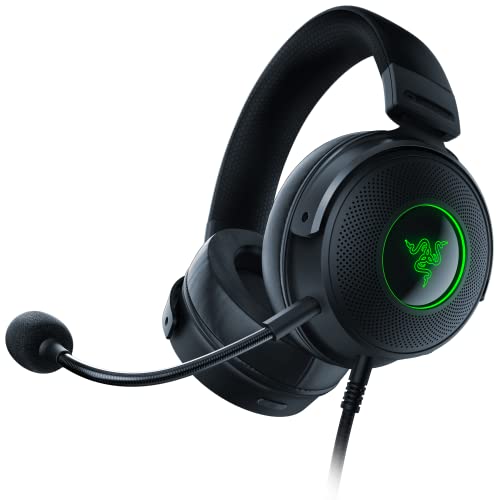 With the launching of the Kraken V3, Razer goes into territory they've never been before. A set of headphones with advanced features such as stereo sound 7.1 and HyperSense.

But the HyperSense model is the one that matters. Yeah, I wouldn’t want the wireless option for gaming anyway. The constant sound drops while I’m gaming. No, thank you.

The Razer Kraken V3 HyperSense sports a top-class design that we are used to seeing on Razer devices. The black-steel reinforced headband looks robust and insanely nice. The headband indeed was a huge upgrade from the previous versions, and there’s also the black memory foam and leatherette ear cups, looking clean and sleek.

The star of the show here is the glow-up Razer logo on each earcup. You can even customize the lighting to your own liking or even turn it off to be less distracting.

Overall, the aesthetic is minimal but really good-looking. You will be able to tell they are gaming headphones, so I wouldn’t advise going so far as taking them to the office. As far as the headsets’ construction and aesthetics go, Razer once again proved that they are the real deal, being among the best design-wise.

In terms of comfort, the comfort level is just too damn high. I even forgot I was wearing them for hours. They sit remarkably well on the head, without crushing your glasses or earrings.

The irony here, though, is that the only reason I knew I was wearing a headset was the cable attached to my PC.

The building materials are really sturdy and nice. I feel like they can last for years if treated well. Yep, as long as you don’t slam them down on the table after seeing the “You Died” screen of Dark Souls for the 20th time.

On the right earcup, you will find the microphone port and the HyperSense button (more on this later). The left earcup houses an infinite volume scroller, a mute button, and a non-detachable cable.

Sadly, the headset uses a USB-A connection. I would really appreciate it if Razer used a headphone jack instead. It would have made the headsets more versatile. Still, I don’t think it is something groundbreaking. You shouldn’t have any issues with the USB A port for the console or PC, but if you are desperate and you want to use them on your phone, you can always buy an adapter.

And of course, there’s also the Razer Synapse software, which gives us a huge range of customization on the headphones. Whether it’s sound quality, mic quality, or the lights on the earcups, you will find everything there, yes even bass boost mode for bassheads, Razer always makes sure to count that one part.

Although there are no things such as ANC, they still do a good job at ambient noise reduction.

Thanks to its closed-back design the Kraken V3 Hypersense can reduce the background noise at a fair extent, what can I say plain razer headset.

The Killer Feature and How do they sound: Razer Kraken v3 Hypersense Review

What separates the Kraken V3 HyperSense from the competition definitely has to be the haptic technology.

HyperSense is an intelligent haptic technology that generates tactile/haptic feedback, elevating games and music to new heights. The Hypersense picks up every key sound in the game (even in music) and then it replicates them through vibrations. To make things easier for you guys, it’s pretty much like the joystick vibration on the PS controllers, but this time you will feel the vibrations on your head, the explosions, the slams, the falls, and every key moment in a game.

I think the HyperSense, haptic feedback feature is the best thing about this headset, but some people might get irritated by it, and I can understand why. You can turn it off via the Razer app, but I wouldn’t recommend buying it if you don’t like the haptic technology. Instead, you can go for the Razer Kraken without HyperSense, which costs less.

The haptic was spiking whenever I landed a headshot through the sniper, or whenever there was a close explosion or fall damage. This made my whole Warzone experience way better. The gunshots felt life-like.

In some other games like MMORPGs, for example, in Genshin Impact, the HyperSense didn’t prove to be much help, but in GTA V or FPS games in general, it was just phenomenal.

The stereo and surround sound have been improved so that the sound perspective is three-dimensional thanks to the THX Spatial Audio settings. This means that you can precisely locate the location of noises in relation to you.

It ranks as one of the most distinctive alternatives available thanks to the THX Spatial Audio and HyperSense haptic vibration.

What’s under the hood?

For the first time, Razer decided to pack its TriFroce Titanium 50mm drivers in the Kraken V3, and we have also seen them in other series such as Kaira and BlackShark. The sound is quite loud and nothing distorts. Besides the hypersense vibrations, the overall sound quality was just wonderful. I had pinpoint accuracy where my enemies exactly were in Cs: GO.

Gaming headset wise I can go as far as to say the sound quality on the HyperSense is one of the best currently. But with me saying this, it doesn’t mean you guys should not listen to your favorite tracks with them. They proved to be great music streamers too.

The headset microphones will never rival the solo gaming microphones, but hey we are not here to sing in a music competition, we need the microphone just to give info in the game.

Unlike the older Kraken models or even the Nari, the HyperSense no longer has a retractable microphone instead, this time Razer decided to put a detachable cardioid microphone that rewards with a lot of voice clarity.

When I didn’t feel like talking or avoiding being toxic to my teammates, I just removed the microphone and later put it back with ease. This sure gives great versatility.

Overall, it is a great microphone that does the job that it was set out to do.

Easily a contender to be among the best gaming headsets currently, impressive sound quality, feature-packed, great mic, great build, and stylish. One thing that might bother you guys is the thing that makes those headsets unique, the HyperSense tech.

But, as I said earlier you can turn it off or just go for the non-haptic technology version or other headphones. However, if you are a hardcore PC gamer, I bet that you will love this feature

If you’re interested in audio interfaces, there are some outstanding audio interfaces here that are worth checking out. You can also check out some excellent soundstage headphones here.