Here we are at another comparison article in which I will try to tell you guys the most important things that should be mentioned about Scarlett 2i2 and Scarlett 2i4.

First thing first, these two devices from Focusrite Scarlett are audio interfaces, which means that they are used to convert instrument and microphone signals into a specific format so that the software and the device you are using can recognize them.

They are devices that are in use by many people around the world, especially professionals who really know the importance of an audio interface.

Anyways, enough definitions, let us see who Scarlett 2i2 and Scarlett 2i4 are! 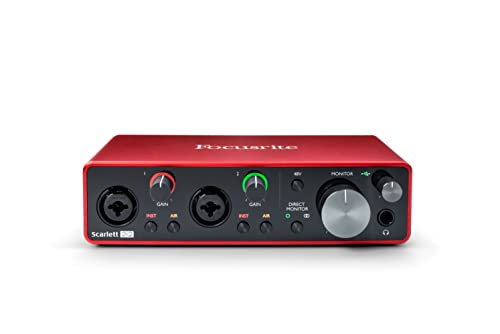 Scarlett 2i2 is an audio interface that was firstly launched on June 27, 2019, and is considered a new one on the market. From the moment it was launched it knew how to steal people’s hearts, and it has become one of the most used audio interfaces all over the world. It definitely knows how to do its job in a better form.

In order to see more or purchase Scarlett 2i2, tap on the link down below!

Even though from the name you might think that Scarlett 2i4 is newer than the 2i2, it isn’t. It was firstly released on June 1, 2016, making it three years older than the one previously mentioned. However, even though “old”, the Scarlett 2i4 is also an audio interface that can be seen in different recording studios.

In order to see more or purchase Scarlett 2i4, tap on the link down below!

These audio interfaces are very similar when it comes to the looks and the design part. There is a super pretty red color, which covers most parts of these devices, and the buttons and the controls are all placed on their front parts.

Overall, both of them come in a compact form factor, but still, thinking about the weight, it seems like the Scarlett 2i2 has something more to say about the portability part.

Both of them, Scarlett 2i2 and Scarlett 2i4 use a USB connector, meanwhile, on 2i2, it is specifically said that it works with a USB type C. There is great compatibility as well, considering the fact that most devices on a USB port, and it is the most commonly used type of connector in different devices.

There are the inputs and outputs that somehow differ in these two audio interfaces. The Scarlett 2i2 owns two instrument inputs, two line inputs, 2 TRS balanced inputs, and a headphone output if you want to use it while using headphones. Also, the preamps for microphones are two in number.

Moving on to Scarlett 2i4, we deal with two instrument inputs, two balanced jack outputs for connectivity with speakers or even to connect professional studio monitors, and headphone output as well. When it comes to the microphone preamps, this audio interface also owns two of them.

You can easily notice that the main connectivity of these audio interfaces is the same, but when it comes to the inputs or the outputs, there is a higher number on Scarlett 2i2, which again seems to have something more than the 2i4.

You may already know that an audio interface’s job is also related to sound quality, and basically, many people use them for sound improvement.

These two audio interfaces are in charge of helping you bring a super professional sound and there are no differences in them starting from the resolutions which I will add below. Both of them will help you sound clear enough, warm, and smooth in many ways. The brand that has made these two interfaces always says that their audio interfaces are made with natural sound in mind, and I think that it is an achievement and definitely one of the greatest ones. There is no noise or hum from other devices because they are able to completely block it so that you can sound clearer.

Based on everything that I mentioned above, you can notice that these two interfaces are the same in the sound quality part and they do a great job helping you sound as professional as ever.

Here we are at the end of this article! I would like to mention that I tried to add and mention the most important things that you guys should know about an audio interface in general. Still, since we are here to choose a winner, I would say that there are some slight differences that make the Scarlett 2i2 one step further.

Anyways, in the final part, on the sound quality, you can notice that there are no differences so that you will sound the same without matter which one you are using, there’s no difference in their phantom power either. But, if you check the connections and even the design, you can easily find which one is better.

There is nothing more that I will add besides I hope you have a clearer idea of Scarlett 2i2 and Scarlett 2i4 after reading this article! Have fun!

If you liked what you read, consider reading some more, there might be a useful blog for you.

Anton Dimitriyev
You'll never find anyone more passionate about sound as me. I love to share my knowledge with others and help people find the right equipment for them.

Yamaha HS5 vs HS7: Which Is The Best For You?

You'll never find anyone more passionate about sound as me. I love to share my knowledge with others and help people find the right equipment for them.