Welcome Back to another comparison article. Today’s topic is about comparing two microphones from the worldly-known brand Sennheiser.

Sennheiser is a German-engineered brand that encompasses exceptional sound quality for professional use with no compromise.

Sennheiser has spent over 70 years researching, producing, and improving audio equipment. To be explicit, these are high-quality audio items.

Any piece of music, any sound, and anything else related to audio that you’ve ever heard have gone through Sennheiser technology during its development.

I’m sure you’re familiar with the sound of a Star Wars lightsaber? A Sennheiser shotgun and a ventilator were used to create it.

It’s a fantastic brand that specializes the audio devices. Best of all, it’s subjective, but Sennheiser is one of the best competitors for achieving amazing audio quality. 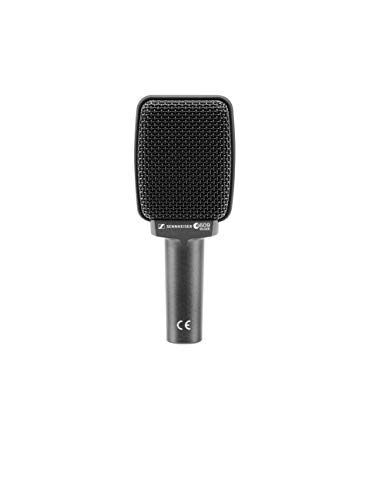 Sennheiser Pro Audio E906 Mic is the existing proof of “Old but Gold” that even though decades have passed, still can be used in live concerts mainly targeted on the guitar.

The first release date is back on April 13, 2004, and left us a legacy in the audio world.

The rugged metal grille is covered in black color and shows a slight sleek design. Excellent durability that can handle harsh drops very well, or throw it away if you want to, it’s a real survivor.

Why Should You Buy It?
Great Power for being a stage mic
Great for Guitar Amp and Guitar Cabs
Highly Dynamic and good for Live Sound
Wider Frequency

The durability is unquestionable as well, it can withstand rigorous attacks on the long roads.

Both mics seem to have pretty much the same design but come in different colors.

When it comes to sound and recording, to be honest, both of these mics are doing an amazing job. Let’s see a little bit deeper.

Having said that, these mics have a sound profile that is extremely similar, although the 906 is obviously more full-bodied.

In general, the e906 will require less EQ and adjusting than the e609. Nevertheless, it sure contains an EQ switch that gives you the freedom for a flat response.

Many of the same instruments, such as Toms, guitars, snare drums, the high male tenor vocals, and vocal harmonies in general. Both perform exceptionally.

They will sound like what is expected from Sennheiser. The differences aren’t that visible.

It’s quite simple to use because it’s very good at dealing with sound pressure levels. The three-position switch on this microphone, however, is by far the most unusual and crucial feature. This is a fantastic mic choice for cutting, boosting, or neutralizing the mic’s effect.

I’m happy with the vocals in this microphone because it has a small pick-up space, which would be useful for other things like voiceover work, podcasts, and so on.

What is EQ in Music?

EQ stands for equalization which is a process of operation where the frequency response is balanced.

The typical recognizable frequency for a human being is between 20 Hz to 20 kHz. In this scenario, EQ manipulates the frequency signals and everything is well-balanced and clear.

The Sennheiser e609 is a far superior mic for capturing guitar or other acoustic instrumentals than any other microphone, even the e906 variant. So, if you’re mainly focused on the guitar, go for it.

The e609 Microphone is a guitar amplifier that needs to be placed somewhere close to the sound source for a desirable sound outcome. Sennheiser e609 has no distortion in the recording process.

The response at high frequencies in e609 is less at 15kHz than in Pro e906 which is 18kHz. This results in higher ultrasonic frequency and obviously a greater welding precision.

I must say that both of these microphones have exceptional sound quality. The ridiculous part is that their competitors since to this cannot produce such premium audio production and Sennheiser e609 and Pro e906 together were released before a decade, actually more than a decade.

Our pick is from Sennheiser Pro Audio E906 Microphone side because of the higher frequency ranges, better boosting sound, and elegant design. The mid-ranges and trebles in Pro e906 are way more detailed in comparison with e609.

Are you on a low budget? if so, then go for the Sennheiser e609 because is cut-priced and most of the features are similar to the Pro e906.

Hopefully, the article was understandable and I contributed to you picking the right one.

Moving along, I would like to introduce to you guys something else that I have already written!
In case you are in search of comparison articles, I would like to mention a comparison between Harman Kardon and Bose, if you like Bluetooth speakers check out JBL Flip 5 vs. Bose Soundlink Flex, or in case you are a Polk fan, you can find out more in the battle between Polk S30 and S35.

If you use Oculus Quest 2 you can find how to connect Bluetooth headphones with it, or if you have ever listened to a podcast or seen one, you may have wondered why do they wear headphones!

Something else that I wouldn’t leave unmentioned is the review of Steelseries Arctis Prime and the Razer Barracuda. These two names are indeed very powerful in gaming!

If you guys are searching for something else, let me tell you that there are some amazing bookshelf speakers under $300, and if you are a parent you can check out the greatest headphones for your baby! Now, from babies moving to seniors, there are TV headphones that you can find in the market.