Now an alternative option to Sony’s best headphones, but at a cheaper price.

If you take Sony’s best headphones, the WH-1000XM4, and you cut some features, so you can cut the price further, you get yourself a Sony WH-XB910N Headphones.

Despite that, the key features like ANC, truly wireless technology with both Bluetooth and Wi-Fi connectivity, and the voice assistants are still there.

The biggest difference that separates those two headphones apart from the price is that the XB910N is aimed towards the Bass-Heads, hence the full name of those headphones is: Sony WH-XB910N EXTRA BASS Noise Cancelling Headphones. 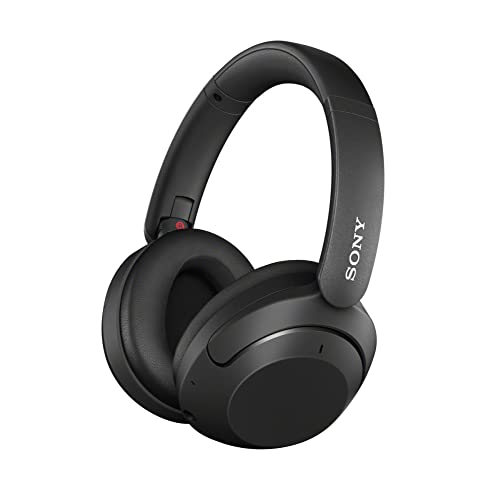 These are a pair of headphones with Sony's flagship features at a more affordable price. In addition, there is also more bass. Basically,  they are a mix of bass and affordability.

Since their design is inherited from the XM4, they sure do look good at first sight. If you were to put them side by side, you would be hard-pressed to tell which one is the XB910N, especially if you don’t choose them in blue, which big brother is not found in.

They have a fairly minimalist and simple design, and they certainly look and feel less expensive than the XM4. They are also mostly made of plastic.Still, it’s the high-quality plastic we are used to seeing on Sony.

The ear cups have a good range of motion to suit even large head sizes, and the padding on the ear cups is faux leather, which feels quite nice on the skin. The same goes for the headband; it has the same padding and it sat comfortably and nicely on the top of my head.

As for the portability, it proved to be more than enough for a pair of over ear headphones. They measure 7.8 x 2.6 x 10.3 inches and weigh 1 pound. They sure are bulky, although their cups can swivel to the point where they can lay flat, and they are also foldable for easy storage. Having said that, they also come with a nice-looking carrying case, the same one as the WH-1000XM4.

Fully capacitive tap and swipe touch controls were my favorite thing in the XM4. Interestingly enough, the XB910N is taking a leaf out of the XM4’s book, and uses the same touch controls. To adjust the volume, rewind or forward the track, play/pause, or take a call, simply touch the surface on the right ear cup of the headset.

If you have never had the chance to see those controls, don’t worry, they are as simple as it sounds. You will get used to them in a matter of time. On the left cup, there is a power button, a quick toggle button for ANC, as well as inputs for both USB-C charging cables and an audio jack 3.5mm cable for wired listening.

The Sony WH-XB910N has the terrific 5.2 version of Bluetooth and supports the so-called “multipoint connection.” As an example, suppose you are playing games on your PC and receive an unexpected call; you can answer the call without having to disconnect along the way.

Sony decided to gift the XB910 more than enough from their flagship XM4. The adaptive sound control suite is here too. The feature is designed to adapt to your activities in order to optimize ambient noise. For example, if you sit, it goes into staying mode. But if you get up and walk or do something, it shifts into walking mode. Running and commuting are also included. Each one of those modes is optimized for the best noise-canceling experience during your activity.

All those features, and a bunch of other things, you will find in the Sony Headphones Connect app, which is viable both for iOS and Android.

This is the part where the XM4 shows its awesomeness. Even though the XB910N has a good ANC, it has only two dedicated microphones that pick up the ambient sound and eliminate them, while the Sony flagship has a whole number of five microphones. No wonder it is crowned as the king of ANC. Still, for the price of the XB910N, I was more than satisfied with its noise cancellation.

The ear cup of the sony headphones will do their job at passively blocking the ambient sound, but there is so much they can do about it, they still remain open back headphones, and sound bleeding is a common thing for them.

ANC (active noise cancellation) is completely another thing, that completely removes any kind of ambient sound, so you can focus to your music or whatever you are listening.

Under its hood, the XB910N packs 40mm drivers, and as the name implies, “extra bass”, they have an extremely bass-heavy sound profile. There’s the XB (extra bass) feature that amps up the bass when activated. It also uses the DSEE tech to restore details lost, and even supports Sony’s 360-degree surround-sound content.

Imagine this: even if you were to turn the bass all the way down via the Sony headphone App, there would still be a little rumbling. The bass delivers an intense thump, rumble, and punchy booms that can even be felt in the throat. At the same time, the vocals and lead instruments don’t fall short but are quite harsh and joyful to hear. I’d really aim those headphones towards bass heads since for most users this might be overwhelming. Basically, Sony hit the sweet spot for bass heads.

Also, something that I found out is that if you have thick or long hair and wear glasses, you might lose some bass since it affects the positioning of the headsets. Overall, the sound quality is great and listenable, not XM4 tier, but for the price it comes with, I have no objections.

The speech quality through the microphone is clearly acceptable and I want to leave it at that. Nothing groundbreaking, but nothing bad either. It does the job it is set out to do just fine. After all, they are wireless headphones that are made to listen to music and not to sing at a music festival.

Another killing trait of the XB910N would be its insane battery life. You get roughly 30 hours of playback and yes, with ANC ON, you get double that, around 50-60 hours. Again, like I always say, battery life heavily varies on volume levels. Yet again, battery life is another thing the XB910N inherited from its bigger brother, making it better than the competition’s recently released Bose QC45.

Yes, I know guys, this looks like a Sony WH-1000XM4 review. The whole review was done under the flagship’s shadow, but that’s the truth. Currently, the XM4 is one of the best headphones out there. If you have money to spend, I’d highly recommend them.

The XB910N was made with a friendly price in mind and delivers the satisfaction of the WH-1000XM4.

Nevertheless, for the price they come with, they provide great audio quality, great design and comfort, decent noise cancellation, great battery life, and, on top of all that, bass!

There are some headphones that are suitable if you have a tragus piercing as this essay was about headphones.

Check out some of the Beyerdynamic DT 990 Pro-specific audio interfaces available.

Brianna Aldrich
Hi, my name is Brianna. I like to listen to music, watch TV and movies, read, and just hang out with my friends. I LOVE writing in my free time!

Hi, my name is Brianna. I like to listen to music, watch TV and movies, read, and just hang out with my friends. I LOVE writing in my free time!